Ukrainian President Volodymyr Zelensky on Thursday made an impassioned plea to show his support for his embattled country on the first month of the Russian invasion which he said is breaking the hearts of “every free person on the planet”.

Zelensky called on people around the world to come together in public for global citizens to take to streets and squares in global protest against Russia’s bloody, month-old invasion.

‘Hellscape’ in Mariupol where 100,000 people are trapped

Zelensky – whose video messages have repeatedly caught the world’s attention – also said he would address NATO members by video calling on the alliance to provide ‘effective and unrestricted’ support to Ukraine, including all the weapons the country needs to repel the Russian onslaught.

“Come to your squares, to your streets. Make yourself visible and heard,” Zelensky said in English in a moving video address Wednesday evening that was recorded in the dark near the presidential offices in Kyiv. “Say people matter. Freedom matters. Peace matters. Ukraine matters. 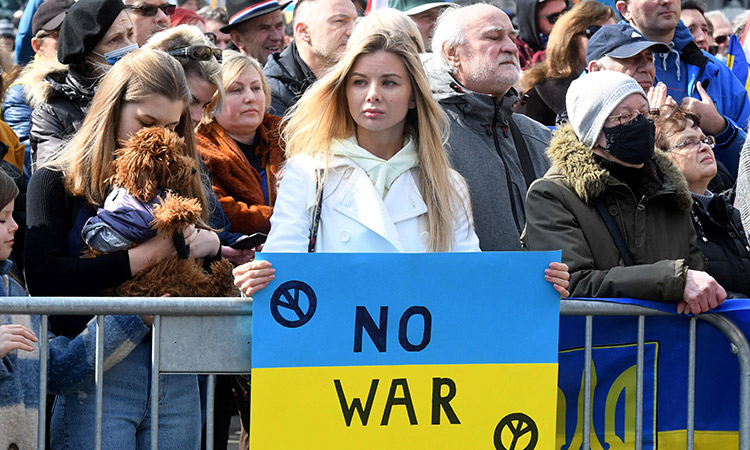 The world must stop the war, says Zelensky.

In a late-night televised address on the empty streets of his country’s beleaguered capital, Kyiv, a defiant but visibly tired Zelensky issued an appeal in English for global solidarity.

“The world must stop war,” he said. “Come from your offices, your homes, your schools and universities, come in the name of peace, come with Ukrainian symbols to support Ukraine, to support freedom, to support life.”

His call came a month after Russian tanks crossed the border, sparking a conflict that killed thousands of civilians and soldiers on both sides.

More than ten million Ukrainians have already fled their homes and cities under sustained Russian bombardment from land, sea and air.

When Russia launched its invasion on February 24 in the biggest European offensive since World War II, a swift overthrow of the Ukrainian government seemed likely. But as Wednesday marks four full weeks of fighting, Moscow is mired in a bitter military campaign.

Witnesses who testify in court enjoy such “judicial immunity”; this is a long-standing principle, driven by fears that otherwise angry litigants would systematically sue witnesses who testified against them, and that the threat of such prosecutions would deter witnesses from coming forward. (Prosecutors can of course still prosecute witnesses they believe have lied, but this […]

Universities fear Leaving Cert results for more than 60,000 students will be released later than normal this year. While results are traditionally released in mid-August, education sources say the decision to hold a second round of exams in July for Covid reasons could push results back to late August or early September. A date for […]

LANCASTER, Pa. (WHTM) – With the recent spike in COVID cases, some colleges and universities in Lancaster County are making changes to the spring semester to try to keep omicron at bay. “We thought doing the first two weeks online would be helpful and returning to regular in-person classes on Monday January 31.stsaid Alan Caniglia, […]